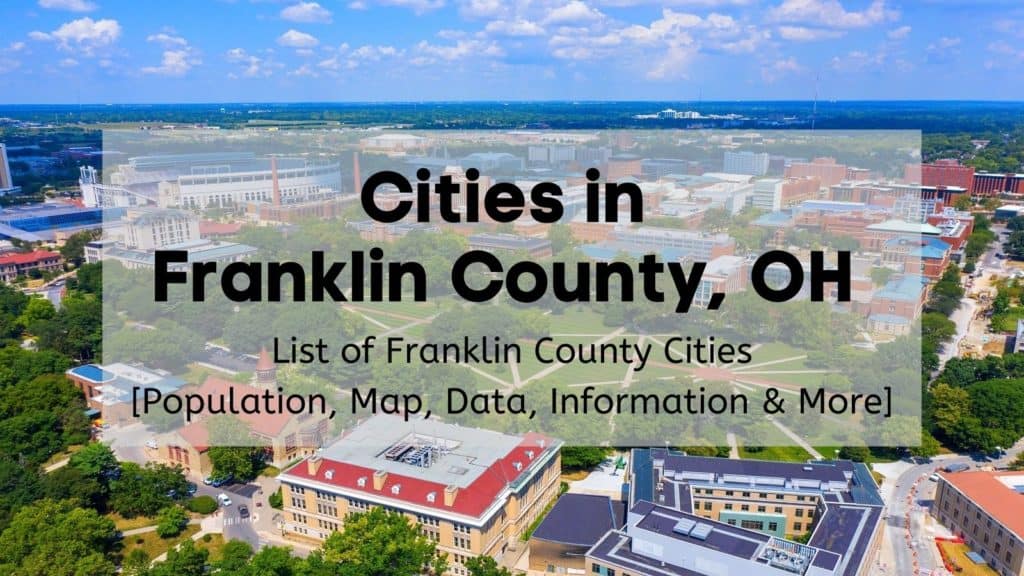 Are you visiting the Columbus area or thinking of relocating to the region? Whether you’re driving through the area on a road trip or trying to decide which city will be your new home, a good place to start is exploring the largest Franklin County cities.

What cities are in Franklin County, Ohio? The county is home to 16 cities, the largest of which is Columbus. The entire Franklin County area is part of metro Columbus with dozens of suburbs, each offering something unique.

This guide will cover the ten largest Franklin County, Ohio cities by population. Note that we won’t cover villages or towns near Columbus, Ohio, townships, or census-designated places (CDPs) which are only defined for demographic purposes by the US Census Bureau.

Named for Benjamin Franklin, Franklin County was established just after Ohio became a state in 1803. Columbus became the capital in 1816 when it was chosen for its central location and major river access. Interestingly, Columbus was only laid out by surveyors in 1812, just four years before it became the capital. It was designed from the beginning as the capital for the state and its population grew from 700 people in 1815 to 4,000 in 1834 when it was large enough for the status of “city.”

Where is Franklin County, OH? The county is located in central Ohio between the counties of Fairfield, Delaware, Madison, Licking, Pickaway, and Union. 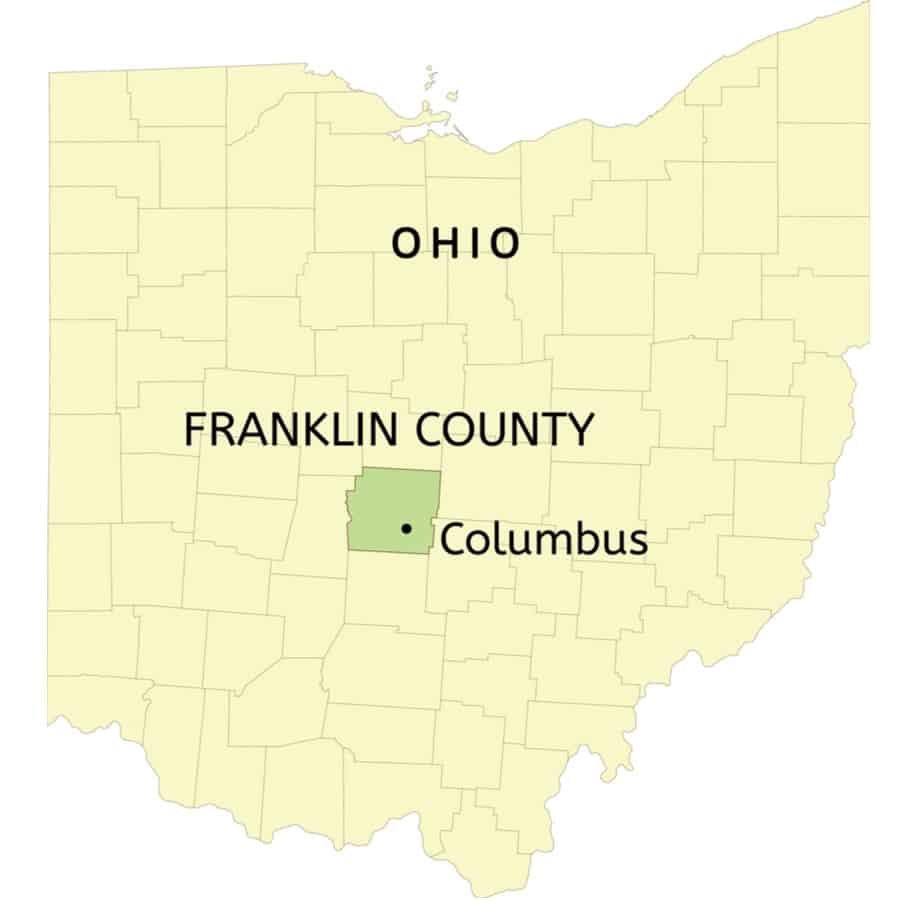 Columbus is known as the Discovery City and Indie Art Capital and known for its public art, award-winning municipal park system, family-friendly attractions, and low cost of living. It’s home to Ohio State University, one of America’s largest universities with a main campus student body of 60,000, and the Columbus Zoo and Aquarium, rated as one of the best zoos in the country.

With a thriving economy and cost of living 8% below the national average, it’s no surprise Columbus is a great place to live for families, young professionals, and retirees! You can learn more in our complete guide to living in Columbus, OH. 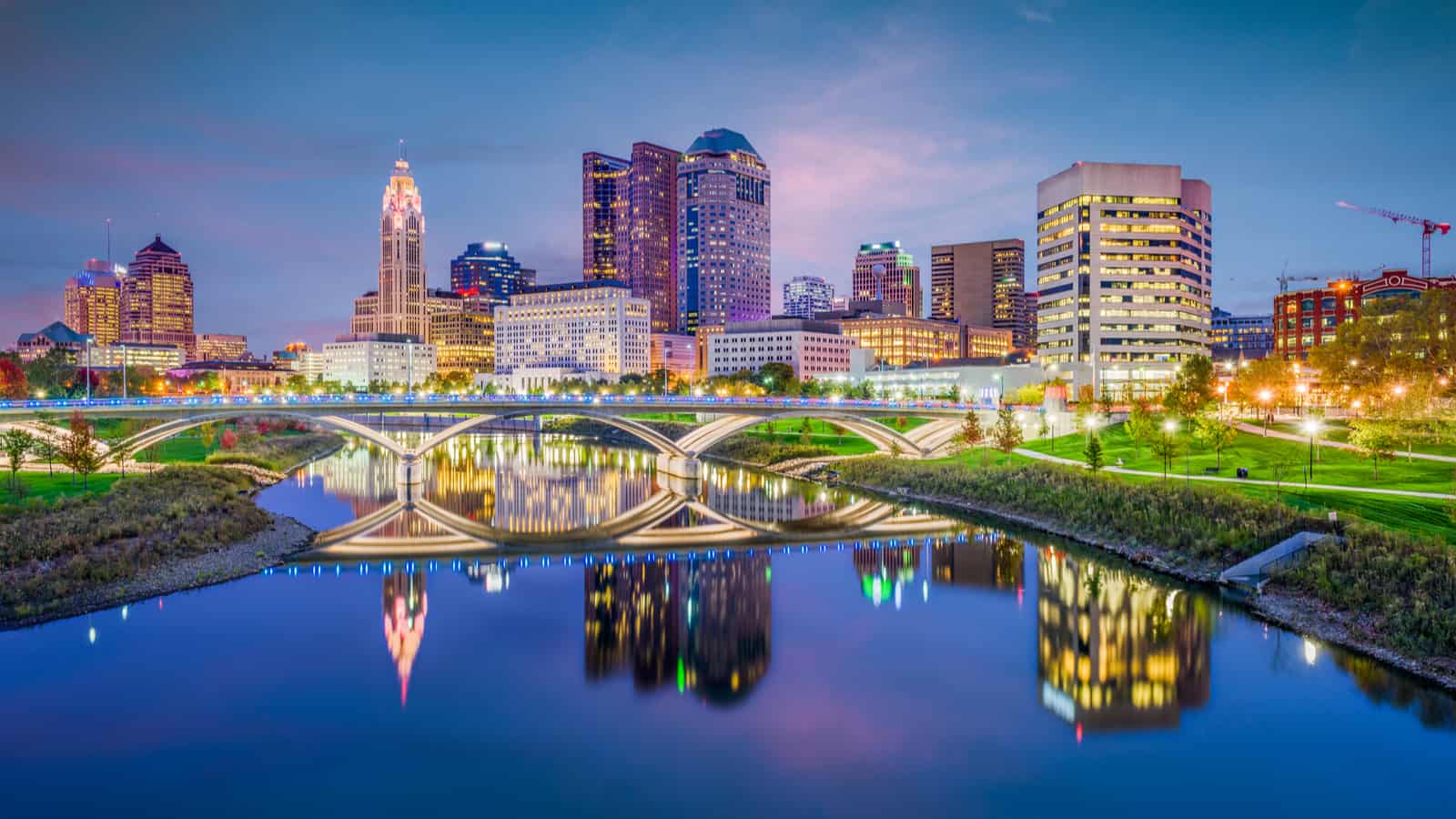 Dublin, Ohio is the second-largest of Franklin County cities despite having a population below 50k. Dublin is the most affluent city in Franklin County, OH with a median household income more than double the state and Columbus metro median! It’s also one of the most educated cities with three-quarters of residents holding a degree.

Dublin is frequently rated as one of the Best Small Cities in America and one of America’s safest cities. Why? Because Dublin has so much to offer!

Dublin, OH is also famous for the annual Dublin Irish Festival, one of America’s largest Irish events recognized as the Most Outstanding Global Festival and Event City in the World.

Grove City ranks third among cities in Franklin County by population. Just 10 miles southwest of downtown Columbus, Grove City was once known for its massive groves of maple, oak, walnut, and beech. Most of the trees were cleared for settling, but the village of Grove City was named in 1853 for the handful of groves that remained.

Grove City offers an affordable cost of living and amazing amenities for families and young adults. The city is home to great parks like Gantz Park with gardens, an arboretum, playgrounds, a farmhouse and sports plus the 620-acre Scioto Grove Metro Park, a riverfront forested park with a playground and gorgeous views. Families also love the Big Splash water park operated by the city and the highly rated Grove City YMCA with a space-themed playground, splash park, and sledding.

A post shared by City of Grove City, Ohio (@grovecityohio)

Best known for Otterbein University, Westerville is one of the largest Franklin County, Ohio cities. It was once called the Dry Capital of the World thanks to an 1859 ordinance banning alcohol sales which led to the “Westerville Whiskey Wars” when a businessman twice opened a saloon in the city which was blown up by locals. Westerville’s temperance movement was so serious, the Anti-Saloon League moved their headquarters to the small town from Washington, D.C. in the early 20th century before they were successful in getting the Eighteenth Amendment ratified and starting the Prohibition era.

Today, Westerville is a popular suburb for families with highly rated schools and family-friendly attractions. It bills itself as a “City Within a Park” with 41 parks and rec centers plus sports complexes, hundreds of acres of preserved forests, and ZipZone Outdoor Adventures. Residents love the Inniswood Metro Gardens nature preserve and Hoover Reservoir Park with boating, fishing, and bird-watching.

It’s one of the most expensive places to live in the county, but it offers a great quality of life! Learn more with our guide to living in Westerville, OH.

The city of Reynoldsburg is located in Licking, Franklin, and Fairfield counties about 12 miles east of Columbus. Fifth on the list of cities in Franklin County, OH by population, Reynoldsburg is one of the best suburbs for outdoor recreation.

Reynoldsburg is home to several parks and family-friendly amenities. Blacklick Woods Metro Park is a massive 643-acre park with wildlife, trails, a nature center, and a golf course. It’s one of the most-visited parks in metro Columbus! Families love John F. Kennedy Park with a large new playground.

The affluent suburb of Hilliard is 13 miles northwest of downtown Columbus and one of the best Franklin County cities for families. Hilliard is often named one of the best places to live in Ohio with a great quality of life, short downtown commute, low crime, and beautiful parks. Residents enjoy an excellent school district, close-knit community, and tons of family-friendly amenities.

The crown jewel of Hilliard is the Homestead Metro Park with sprawling green space, sand volleyball, a fishing bridge, and more. At the Roger A. Reynolds Municipal Park, kids can swim and sled, while the Hilliard Family Aquatic Center offers swimming lessons and more.

Learn more about this beautiful suburb with our guide to living in Hilliard, OH.

Upper Arlington, or UA, is one of the largest Franklin County, Ohio cities and one of the most affluent, ranking second after Dublin, OH. Upper Arlington is also the best educated of cities in Franklin County Ohio with an impressive 77% of residents holding at least a bachelor’s degree and almost all residents holding a high school diploma or GED.

Upper Arlington is ranked as one of the best places to live in the country by Money magazine thanks to its quality of life, low crime, great art scene, and excellent outdoor recreation. Residents enjoy amenities like Thompson Park and the Ohio State University Golf Club.

Learn more about living in Upper Arlington, OH with our complete guide to the city!

A post shared by City of Upper Arlington (@cityofua)

The city of Gahanna in northeast Franklin County adjacent to Columbus, New Albany, Mifflin Township, and Jefferson Township. An affluent suburb, Gahanna is home to several private schools like the Columbus Academy and its downtown has undergone revitalization to add new public spaces, restaurants, and amenities.

Residents enjoy nearly a dozen beautiful and well-maintained parks like Hannah Park and Friendship Park with creek access for fishing and canoeing.

Pickerington may be one of the smallest cities in Franklin County, Ohio, but it’s a great place to live for families. Just 17 miles southeast of downtown Columbus in Fairfield and Franklin counties, Pickerington is known for its tree-lined streets, very low crime rate, excellent schools, and historic downtown shopping district.

Pickerington has one of the strongest housing markets in the county with home prices 42% higher than the county average. Housing in this affluent suburb is in demand with families with a highly rated school district that includes Pickerington High School North, ranked #13 in the Columbus metro area with an impressive AP participation rate of 73%.

The small suburb of Whitehall is just 15 minutes east of Columbus. The introduction of the country’s first regional shopping center in the late 40’s and expanding borders helped Whitehall experience rapid population growth. Between 1950 and 1960, it grew from 4,300 to more than 20,800 people! Today, it’s known for its affordability, growing economy, and diverse population with more than 20% of residents speaking a language other than English at home.

How many cities are in Franklin County, OH?

There are 16 cities in Franklin County, Ohio. The county also has 10 villages and 17 townships. There are five census-designated places (CDPs) and about seven other unincorporated communities.

What is the most populous city in Franklin County?

The most populous city is Columbus, the county seat with a population of 902,000.

What is the wealthiest city in Franklin County, OH?

Dublin is the most affluent Franklin County city with a median household income of $137,900. It’s followed by Upper Arlington where households earn a median income of $123,500.

What is the largest city in Franklin County by area?

What is the Columbus, Ohio county name?

Columbus is the county seat of Franklin County.

Which of These Franklin County Cities Is Right for You?

Does one of these beautiful cities sound like the perfect place for your family? Whether you’ve decided on urban living in the capital or you’d prefer the space of the suburbs with excellent schools and outdoor recreation, Krupp Moving & Storage is ready to help. Give us a call once you’ve settled on a new neighborhood for a free, affordable moving estimate! 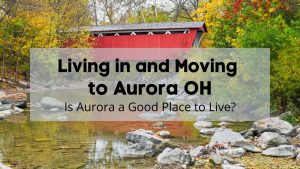 Living in Aurora OH 🪴| Moving to Aurora Tips and Guide

Aurora is a city located in northeastern Ohio which is situated on the Aurora Plateau, a formation of bedrock that was once part of a 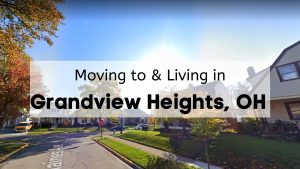 Is Gahanna OH a Good Place to Live? [2022] | 🤩ULTIMATE Moving to Gahanna Tips

The city of Gahanna, Ohio is located in Franklin County and is a suburb of Columbus, the state capital. The city was founded in 1849