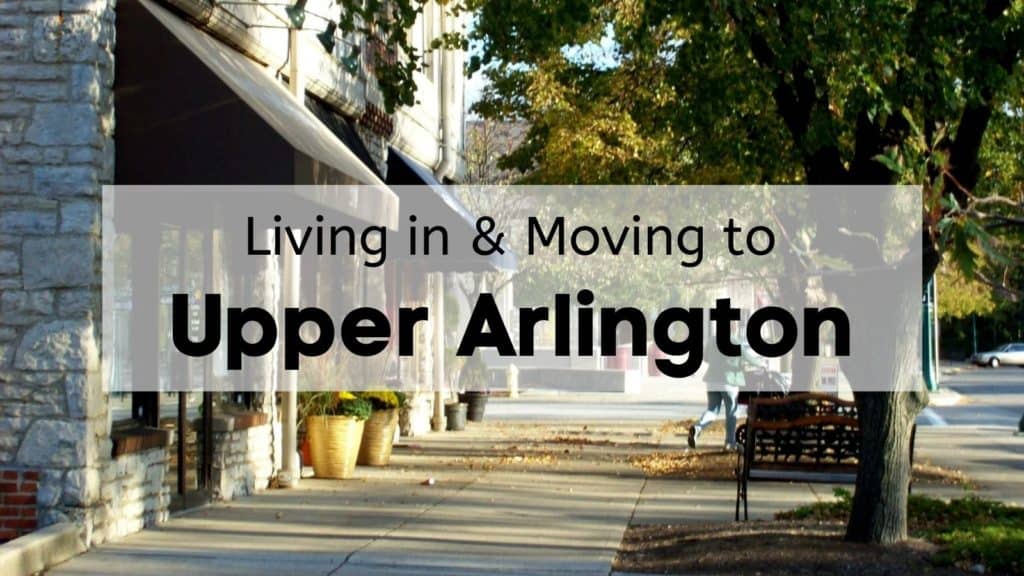 The area was developed by brothers King and Ben Thompson who bought 840 acres and called it the “Country Club District”. The name later changed to Upper Arlington due to its geographical location to Arlington, which is now known as “Marble Cliff”. Following World War II, the housing boom hit the city with a large number of people moving to Upper Arlington and building new homes. The community of Old Arlington is listed on the National Register of Historic Places.

The city of Upper Arlington is known for its diverse and upbeat community with a strong local art scene.

How many people live in Upper Arlington? There was substantial growth during the 1950s and 1960s with nearly 30,000 newcomers relocating to Upper Arlington during that two-decade period. The Upper Arlington population is 35,299 residents with a median age of 41 years old.

Upper Arlington demographics are currently made up of about 88% Caucasian, 7% Asian, 3% Hispanic or Latino, and 1% Black or African American. The Upper Arlington gender ratio has a close split of about 52% female and 48% male. Among the most wealthy cities in the Columbus area, the median household income in Upper Arlington is $123,548.

While just over 20% of people residing in Upper Arlington rent, a few leasing options can be found around the area. The average price of rent in Upper Arlington is about $1,216 per month depending on where you live and what amenities are nearby.

Anyone looking for convenient shopping in Upper Arlington will discover great places to shop including CVS, the Kingsdale Shopping Center, Walgreens, Ulta, Whole Foods, Kroger, and the Shops On Lane Avenue.

Upper Arlington gets about 39 inches of rain per year and about 22 inches of annual snowfall. The humid continental climate in Upper Arlington keeps the weather warm and humid throughout the summer and brings cold, windy winters.

The average temperature in Upper Arlington varies between the low 60s and mid-80s in the summer. As winter approaches, the temps can reach lows in the teens and gets up to the mid-30s during the day.

5. Things to Do in Upper Arlington

Fun activities, exciting things to do, popular parks, interesting landmarks, and other great Upper Attractions are located all over the city.

Among the top places to visit in Upper Arlington, the local Thompson Park features outdoor activities that change with the seasons. Summertime brings days of fun under the sun at the athletic fields or the children’s playground. Winter still offers fun activities in Upper Arlington as residents come to the park for sledding and playing in the snow.

Whether you want to use the tennis courts or the softball diamonds, Fancyburg Park has some of the best activities to do in Upper Arlington. Kids love the park’s playground while adults can wander the park as they walk or jog along the trails.

To go along with the city’s fun activities, there are also plenty of top-rated places to eat in Upper Arlington as well.

The relaxing scene over at Brassica is inviting and will have visitors coming back again and again. This popular Upper Arlington restaurant has a delicious spread of menu items that includes falafels, chicken, hummus plates, sandwiches, and much more.

At Houlihan’s diners get to select from a huge menu of fantastic pub favorites. With a relaxed dining scene, people visiting this top place to eat in Upper Arlington can choose between steaks, pasta, salads, soups, and other mouthwatering plates.

Upper Arlington jobs can be found with a handful of great local companies as well as national brands. Looking through local job listings, some of the best places to work in Upper Arlington are:

Commuting from Upper Arlington to Columbus is a common option for workers who live in the city. As a well-known bedroom community, the trip to the big city takes about 15 minutes and covers about 5.5 miles both ways.

Indeed has a large list of job opportunities that are currently available in Upper Arlington.

Making up more than 28% of the population, there are approximately 9,883 kids between the ages of 0 and 18 years old residing in Upper Arlington. These numbers are a clear indication that Upper Arlington is a great place for families to live.

The closest colleges and universities to Upper Arlington are Ohio State University–Columbus, the Mount Carmel College of Nursing, the Columbus College of Art and Design, and Franklin University.

There is a growing list of reasons that makes relocating to Upper Arlington a great decision. For anyone who has decided to take the plunge, we have the top Upper Arlington movers who are trained to handle these moves. Get in touch with Krupp Moving today at (614) 000-0000 or fill out the Request a Quote form on this page for a free moving estimate!