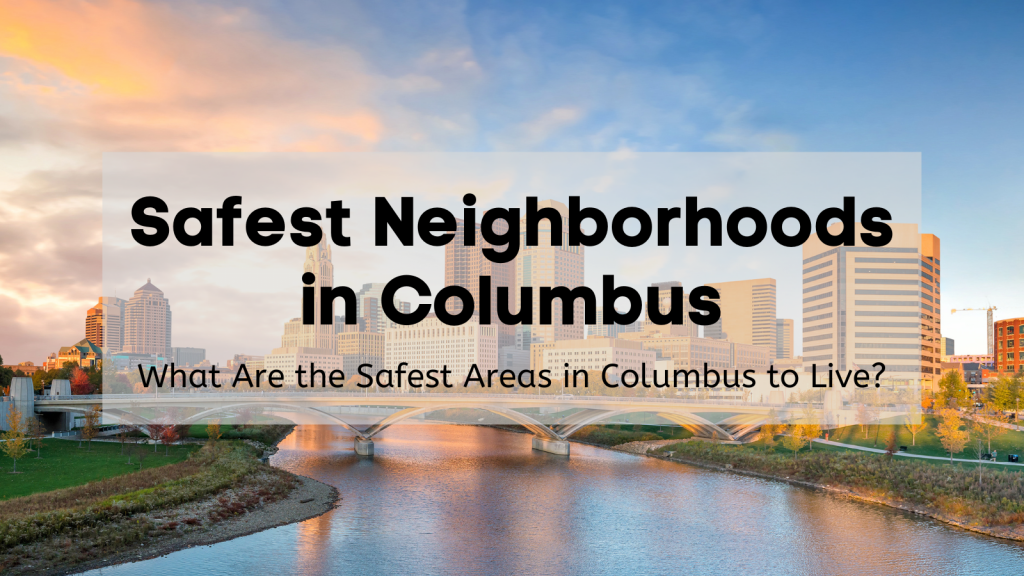 Safest Neighborhoods in Columbus [2022] | 🔐😍 What are the Safest Areas in Columbus & Which to Avoid {Map, Data, Tips}

As the state capital of Ohio, Columbus is a hip, innovative, and ideal city for young adults because it has become one of the top spaces for art and the tech industry. A few iconic spaces within Columbus include: the Columbus Zoo and Aquarium, the Columbus Museum of Art, and the Franklin Park Conservatory and Botanical Gardens.

Now, we understand the importance of finding a neighborhood that meets your needs while also being a safe place to call home. Whether you’re a young adult just starting on your own, a family looking to plant your roots, or a senior looking to retire, you deserve to find a safe neighborhood.

While Columbus has a higher crime rate than the national average, that doesn’t mean there aren’t safe places within the city. With a wide variety of low-crime and family-friendly neighborhoods, you can easily find your ideal area in Columbus, OH.

City officials have worked hard to reduce gun violence within Columbus, which has helped lower the homicide rate by 35% from this time last year. Yes, the total crime rate per 100k people is 53.9% higher than the national average, but you can still find safe neighborhoods. Click here to check out the local Columbus crime statistics in the areas you’re considering, and check our complete Columbus crime rate article. In the meantime, here is a breakdown between the main two categories: property and violent crimes.

For property crime, Columbus has a rate of 3,308 per 100k people. The majority comes from theft, then burglary, and then motor vehicle theft.

Columbus does have a rate of 503 per 100k people for violent crime. The majority comes from robbery and aggravated assault, and murder or rape is well below the rest of Ohio and even the national average.

While these numbers might seem high, just like any other city, there are high crime areas, yet plenty of safe places too.

Finding a low-crime area and whether it’s kid-friendly is essential for most people before they relocate. Here are the top 7 safest neighborhoods in Columbus, Ohio!

Grandview Heights | One Of The Best Places To Live In Columbus

Grandview Heights, a.k.a. Grandview, as the locals call it, provides a high-quality lifestyle to it’s residents. It’s a small neighborhood with 8,085 residents, but one of the best places to call home within Franklin County, OH. One of the big attractions in this neighborhood is Wyman Woods Park.

Grandview is a family-friendly neighborhood that offers an urban lifestyle while being a safe place to call home. If you’re looking for one of the best places in Columbus to call home, then living in Grandview Heights is the place for you.

Known as a suburban city, Bexley has 13,928 residents, with the median age being 35 years old and the average household income is around $109,036. The schooling is excellent and has a wide variety of public and private education options. For the most part, Bexley is an affordable neighborhood to live in, but what makes it cost higher than the national average is purchasing a house, so plan accordingly.

When it comes to downtime, parks are big in Ohio, and the neighborhood of Bexley is no different. Jeffrey Park and Schneider Park Athletic Field are the two main places people will go to hang out after work or on the weekend. If it’s too hot to be outside, you can find people going to a local landmark, the Drexel Theatre.

If you’re considering a move to the beautiful neighborhood of Bexley, here is an ultimate moving guide with everything you need to know.

A post shared by City of Bexley, Ohio (@cityofbexley)

Established in 1862 as one of the first suburbs in the area, this historic and family-friendly community is one of the best places to settle down in Columbus, OH. Plus, being safer than 97% of other neighborhoods in Columbus, Italian Village is known for being a popular area to purchase a home.

They are on a mission to preserve the history of this beautiful community and an official designated historic district. One of the most famous events in the Italian Village is the Columbus Italian Festival during the Fall where there is live music and a parade.

As a northern suburb in Columbus, Worthington has plenty of iconic places to visit, but here are a few of the most popular: Ohio Railway Museum and Olentangy Park.

With the median household income sitting at $104,362, most of the residents are owners of a home.

When it comes to jobs, the workforce is primarily white-collar jobs. These can include position titles such as lawyers, accountants, computer programmers, consultants, and company management.

Worthington is one of the best neighborhoods to call home in Columbus, OH, and if you plan on moving to Worthington, know that it’s well worth the relocation.

The Brewery District is the nightlife of Columbus, Ohio. They have everything from converted Victorian Breweries, gastropubs, farm-to-table restaurants, live music, dancing, and the well-known Scioto Audubon Metro Park.

It’s one of the best places to live, especially if you love hitting the town at night or spending time outside!

Annual music festivals at Goodale Park, contemporary art shows at the Pizzuti Collection of the Columbus Museum of Art, and the historic architecture makes the Victorian Village unique. This neighborhood is considered walkable, so you can easily access areas such as grocery stores, restaurants, and bars, without having to go far.

Harrison West has some of the best public schools in Ohio and is considered a safe neighborhood that consistently focuses on creating a community feel by beautifying the area.

In 1975, Harrison West was added to the National Register of Historic Places and can be located northwest of downtown Columbus.

Whether you’re a young adult, a working professional, or currently raising a family, Harrison West is affordable and perfect for all age groups.

Neighborhoods To Avoid In Columbus

As we mentioned earlier, every city has areas that should be avoided. Here are the 5 dangerous neighborhoods in Columbus:

Map Of Safest Neighborhoods In Columbus

For a quick overview, here are some of the commonly asked questions about Columbus, OH.

Is It Safe To Live In Columbus, Ohio?

The short answer is yes! It is safe to live in Columbus, OH. While there might be areas to avoid, that is common in any city, so don’t let that prevent you from moving to such a vibrant and beautiful community.

What Parts Of Columbus Should I Avoid?

You should avoid high-crime neighborhoods such as Milo Gorgan, Franklinton, South Linden, Tri-South, and North Central.

What Are The Safest Neighborhoods In Columbus?

Are you thinking about living in Columbus, OH? These top-rated neighborhoods are a perfect place to plant your roots because of their safe and family-friendly communities and opportunities for young professionals. When the time is right, Krupp Moving & Storage is here for you! With 15+ years of experience and our team of highly trained crew members, we will make your move to Columbus seamless! Call us at (614) 000-0000 for a free quote!