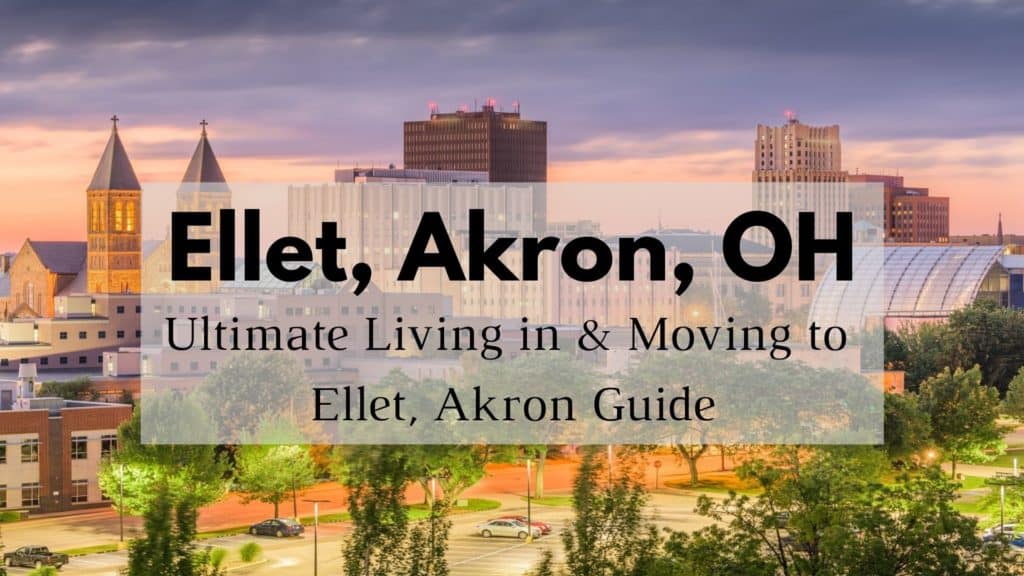 Looking for the best place to live in Akron? Don’t overlook the residential community of Ellet. What is Ellet, Akron known for? Its affordable housing, excellent schools, and close-knit community. Ellet is the largest neighborhood in Akron and close to downtown yet feels a world away with a residential suburban lifestyle and some of the newest homes in the city. The neighborhood of Ellet was named for Samuel Ellet, an early settler of the area whose sons purchased the land that one day became Ellet. If you’re looking for a walkable, affordable place to live in Akron, moving to Ellet, Akron may be the right move for you!

The neighborhood of Ellet got its start in 1810 when three of Samuel Ellet’s sons bought the land from Simon Perkins. Ellet was one of the region’s early pioneers who arrived that same year. By 1929, Ellet was annexed to the City of Akron.

Ellet’s population grew steadily and managed to avoid feeling the brunt of Akron’s economic crash when rubber factory jobs disappeared in the 1970s and 1980s. At the time, many residents worked in chemical and aerospace facilities. The Rubber Bowl, once owned by the neighborhood, saw performances by the Rolling Stones, Black Sabbath, and more. By the 1990s, when Akron’s population was down 3%, Ellet’s population began to boom. Nearly 1 in 12 homes in Ellet were built during or after this boom.

Today, Ellet is home to about 18,000 people, the second-largest neighborhood in Akron by population after Goodyear Heights.

While just as close to downtown as Wallhaven or Highland Square, Ellet is physically separated from the rest of the city by the Akron Executive Airport on the southwest, the Goodyear facility and headquarters to the west, the Goodyear Heights Metro Park, and the Little Cuyahoga River and I-76 to the north.

Ellet is home to several major attractions in Akron like the University of Akron’s Rubber Bowl and the Goodyear Airlock.
While living in Ellet, you’ll be served by Akron Metro bus route 110 Green/Springfield.

Ellet Lifestyle & Culture – What’s it Like Living in Ellet, Akron?

Before moving to Ellet, Akron, you probably want to know what it’s like living in the community. Ellet has been described as “Akron’s suburb in the city.” The largest neighborhood in the Rubber City, Ellet has an identity all its own. While living in Ellet, you won’t feel like you’re just a couple of miles from downtown. Ellet doesn’t feel like an urban community with mostly residential streets surrounding a central business area. This Akron neighborhood famously avoided many of the issues surrounding communities experienced when Akron’s economy was hit hard.

Ellet residents are proud of their community and sense of identity and proudly tell people where they’re from. Even as the neighborhood’s blue-collar residents moved up financially, many of them stayed in the neighborhood and built larger homes.
One of the many factors that drives Ellet’s popularity is its excellent schools. Ellet is a very family-friendly neighborhood in Akron with a new high school and recently rebuilt elementary and middle schools. The Ellet Community Learning Center, formerly Ellet High School, is one of the city’s best schools.

Despite being one of the most populous neighborhoods in the city, Ellet is one of the least densely populated with plenty of open space and large yards. Ellet is a predominantly white neighborhood (91% of the population) with a foreign-born population of just 4%. Of those born outside the U.S., most were born in Mexico, Lebanon, and Bosnia and Herzegovina. The median household income in Ellet is $43,200, below the Ohio and Akron area medians. About 8% of households earn more than $100,000 per year.

Shopping, Restaurants & Things to Do in Ellet, Akron

What type of amenities does the neighborhood have to offer after moving to Ellet? While mostly a residential community, you’ll still find plenty to see and do.

Most commercial activity in Ellet is located along East Market Street which is part of Ohio Route 18 and the Eastgate Ellet Plaza on Canton Road/Ohio State Highway 91. There is also new retail development near Hyre Park. You’ll also be minutes from Arlington Plaza, a large shopping center to the west.

One of the most popular Ellet attractions is Springfield Lake Park. Located just south of the neighborhood, the beautiful lake has a marina for boating, fishing, and plenty of green space for enjoying the scenery. Goodyear Heights Metro Park just to the north is another one of the best things to do in Ellet with kids and the whole family. This 400-acre space is one of the top parks in Akron and it offers sledding, hiking, and fishing with plenty of wildlife and trails. Ellet is also home to one of the state’s best haunted houses: Haunted Schoolhouse & Laboratory – the perfect place for autumn thrills.

Curious about the type of cuisine you’ll enjoy while living in Ellet, Akron? One of the neighborhood’s top-rated restaurants is The Lamp Post, a small family-owned Ellet restaurant with American classics, great service, and affordable prices. The Lamp Post is one of the best places to grab breakfast with famous sausage gravy! Azteca Mexican Restaurant is another neighborhood favorite. Enjoy homestyle Mexican dishes in a family-friendly setting with patio dining and live music. Right in the heart of the neighborhood near the airport is Oldies & Goodies Family Diner, an American-style diner popular with families on weeknights.

Here’s where to find the best things to do in Ellet, Akron:

Ellet enjoys solid housing demand thanks to its newer homes and stable home values compared to other neighborhoods in the city. New airport development is expected to create even more jobs in the area which will boost the Ellet economy and help support higher real estate prices.

Ellet is known for its affordability with homes priced everywhere from $60,000 to $200,000. The median home price in Ellet, Akron is $135,900, almost half that of the U.S. average. The Ellet real estate market is fairly competitive and many homes get multiple offers. You’ll find mostly single-family homes with the typical 3-bedroom, 2-bathroom home listed between $100k and $160k. Start your search for homes for sale in Ellet, Akron, OH to get an idea of just what your budget can get you.

Thinking about renting after moving to Ellet? You’ll find very limited but affordable rental options. 1-bedroom apartment rent in Ellet is usually around $650 per month. There are a handful of small apartment complexes in the neighborhood including one on Ellet Avenue near Hyre Park and Ellet Complex Apartments on E Market Street.

Ellet Park Gardens is one of the most in-demand rental properties for people living in Ellet. Spacious two-bedroom apartments in this upscale building are around $930 to $1,200 depending on size and floor plan. Seven Stories East Condominium offers owner-occupied and rental condos on E Market Street. You can buy into the condo complex for around $55,000.

Does living in Ellet, Akron sound perfect to you? The friendly movers at Krupp Moving & Storage are here to help you relocate to Ellet without the stress and hassle. Give us a call ahead of your move to request your free moving quote!