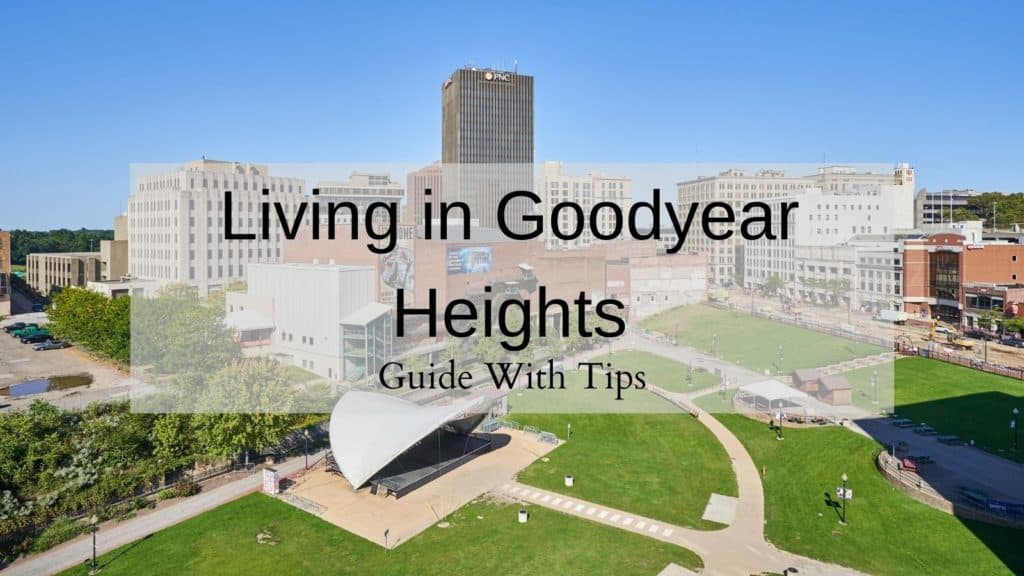 Goodyear Heights is not only one of the largest Akron, Ohio neighborhoods, it’s also the most historically significant. Named after the company that funded its development, Goodyear Heights is known for its 20th century “factory town” style, that once provided more than just affordable housing for its workers. The thoughtful community planning created a suburban oasis with close proximity to Downtown Akron. It’s now ranked as one of America’s most affordable places to live. The charming architecture, winding streets, and green parklands make Goodyear Heights an ideal Akron neighborhood for families of all types.

The history of Goodyear Heights is significant on both a local and national level. The area was sparsely populated farmland until the early 20th century, when Goodyear founder Frank Seiberling built up the area to house his employees and their families. Widely deemed a great achievement in city planning, the neighborhood is a reminder of the city’s “boom years,” from 1910 to 1920, when Akron was one of the fastest-growing cities in the world. The success of the Goodyear and Firestone companies earned Akron the title of The Rubber Capital of The World.

Goodyear Heights is a byproduct of both the Garden City Movement and the Arts & Crafts Movement, which began in England in the mid-19th century. Seiberling worked with landscape designer Warren H. Manning and architects Mann & MacNeille of New York to create a factory town that combined affordable and attractive housing with access to nature and parklands. Goodyear Heights is often cited in city planning and architecture publications as one of the best examples of its type in the nation.

Unfortunately, the rubber industry experienced a major downturn in 1921, resulting in Seiberling’s loss of the Goodyear company and thousands of jobs lost. There are still records of Seiberling’s additional plans for the area, though they were never built.

Post World War II saw another development boom, and the neighborhood expanded again. Today, plans are underway to revitalize Goodyear Heights’ East End, while local residents and officials are working to have Goodyear Heights included on the National Register of Historic Places.

Goodyear Heights is located in Summit County. This Akron suburb is conveniently located just above East Akron, and is adjacent to Tallmadge, Ohio. The Akron Metro No. 30 and No. 19 buses serve the neighborhood, running hourly on weekdays and every 75 minutes on the weekends. Though Goodyear Heights public transportation is available, most residents rely on their cars for their day to day needs.

Those living in Goodyear Heights can take Brittain Road and Eastland Avenue to neighboring Chapel Hill or Tallmadge. Darrow and Canton Roads lead south to Ellet. Goodyear Boulevard is the neighborhood’s major thoroughfare, winding through Goodyear Heights to the campus-like Blue Pond area. Beyond Blue Pond is The East End, with its newly renovated loft apartments and a conveniently located Hilton Garden Inn. I-76 is easily accessible at the Akron neighborhood’s south end. Travel is easy as well, with Akron Canton Airport only 17 miles away, and Cleveland Hopkins Airport 37 miles away. The zip code in Goodyear Heights is 44305.

Who Lives in Goodyear Heights?

The median household income in Goodyear Heights is $37,644, with about one third of the adults holding sales or service related occupations. Some of the top-rated Goodyear Heights activities include biking through the winding streets and hiking in the local parks. There are also fourteen places of worship in and around Goodyear Heights.

Residents are also interested in community improvement and outreach, with the R.I.G.H.T. Committee and Good Neighbors program dedicated to helping one another. There is a community development corporation dedicated to preserving, improving, and revitalizing the area that is currently in works.

Things to Do in Goodyear Heights, Places to Eat, and Where to Shop

Though Goodyear Heights isn’t a hopping urban scene, there are still plenty of things to do in Goodyear Heights. Reservoir Park Community Center, situated on the 20 million gallon reservoir that serves the city, offers various youth and community recreational programs. Another fun activity in Goodyear Heights for kids is Goodyear Heights Metropolitan Park, or “Metro” as it’s called by locals, which is a true Akron community treasure. Almost half the size of Central Park, Metro boasts beautiful walking and hiking trails among lush flora and fauna. Residents enjoy fishing and picnicking in the warmer seasons and sledding in the winter. Metro Park also holds seasonal festivities like the Annual Fall Family Outing and Heinz Poll Summer Dance Festival.

Though known for its extensive parklands, there are social activities in Goodyear Heights for couples as well. Those living in Goodyear Heights can enjoy discount movie tickets at the Linda Theater, which has been serving the area since 1948. At The East End, what was once the Goodyear headquarters has been renovated and repurposed into the Goodyear Theater & Hall. With seating capacity of 1,458 and 3,500 respectively, acts like Gavin DeGraw, Smashing Pumpkins, and Sara Evans have performed here.

For a laid-back night out, The Brooklands Bar and Grill is the best Goodyear Heights restaurant and has been a neighborhood fixture since it began as a speakeasy during Prohibition; residents love their Thacker burgers. If you’re looking for breakfast, Julian’s is rated one of the best Goodyear Heights cafes in all of Akron. Looking for amazing bread? They don’t advertise it, but Massoli’s Italian Bakery on Brittain Road offers exceptional bread and buns.

Avid readers can curl up at the recently renovated Goodyear Branch Library, or attend their various events such as arts and crafts workshops and story times in Goodyear Heights.

Renters may not have as much luck in Goodyear Heights, though there are options here and there. The East End has been repurposed into gorgeous loft-style apartments, and there are some unit rentals in the Historic District. The average one-bedroom house or apartment rental is about $495/month.

Goodyear Heights families enjoy access to many schools in the Akron area, almost all of which have been updated in the last fifteen years. There is also access to nationally-ranked hospitals including Summa Health System, Cleveland Clinic Akron General, and Akron Children’s Hospital.

Moving to Akron? If so, living in Goodyear Heights is an Akron neighborhood that will make your dreams come true! When it’s time to change your address, give Krupp Moving a call. We’re the best Akron moving company, and we’ll take all the stress out of changing homes!