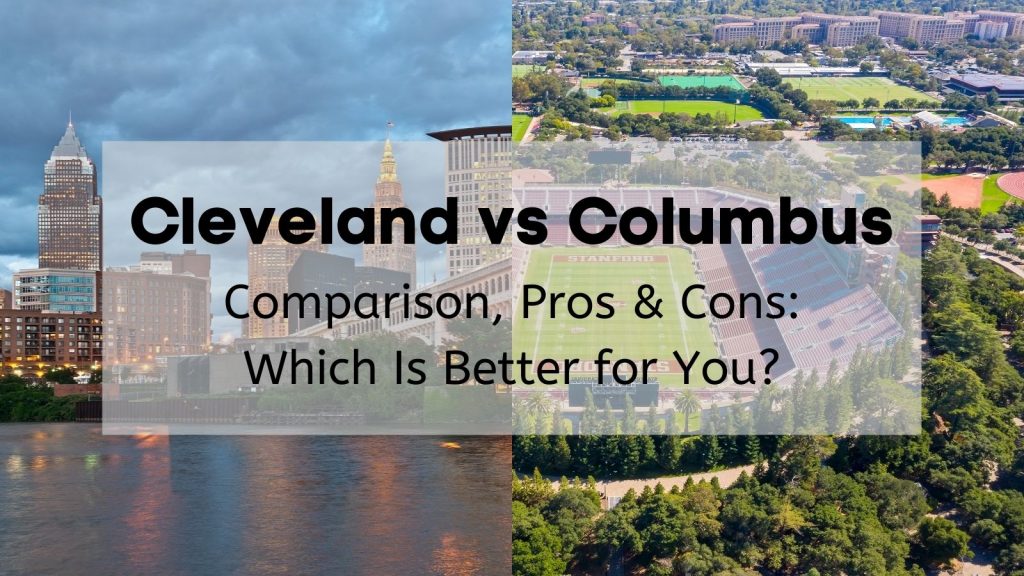 Columbus vs Cleveland Ohio 🤷 | Comparison, Pros & Cons: Which Is Better for You?

Are you thinking about moving to Ohio but not sure which city offers the best lifestyle, amenities, and job opportunities? Cleveland and Columbus are the two largest cities in Ohio and often compared thanks to their affordability and quality of life, but they are very different in terms of size, economy, and amenities.

Cleveland is known for the Rock and Roll Hall of Fame, Cleveland Clinic, Lake Erie beaches, and award-winning Metroparks. It’s nicknamed the Forest City thanks to its gorgeous outdoor attractions. Columbus is known as the Indie Art Capital and Discovery City and best known for Ohio State University, the Columbus Zoo, and its college football culture.

To help you decide between these two great cities, here’s a complete look at the pros and cons of living in Columbus versus Cleveland and what each city has to offer.

Pros & Cons of Living in Columbus vs Cleveland

Which city is right for you? Compare and contrast Cleveland vs Columbus pros and cons to see what you’ll love about each city – and drawbacks that may be deal breakers.

Family-friendly attractions including the Columbus Zoo

One of the benefits of living in Columbus is the city’s many things to do with kids – or kids at heart. Top Columbus attractions include the LEGOLand Discovery Center, Otherworld art installation with mixed reality playgrounds, and the Magic Mountain Fun Center.

Famous for its association with director-turned-ambassador Jack Hanna, the Columbus Zoo and Aquarium is the second largest zoo in the country and one of America’s top-rated zoos. It’s also home to Zoombezi Bay, a large water park with 19 fun attractions for all ages. The Columbus Zoo operates the Wilds about 80 miles east of Columbus which offers a safari experience with Indian and Southern white rhinos, cheetahs, three species of giraffes, ostriches, zebras, and more!

A post shared by Columbus Zoo and Aquarium (@columbuszoo)

Many cities in the Midwest are shrinking including Chicago (7% population decline between 2000 and 2010) and Cleveland (6% population loss). In Columbus, the story is different. The city has never seen its population decline and it continues to grow thanks to affordable housing, a strong economy, and ever-growing city limits. The Franklin County GDP grew $2.3 billion between 2014 and 2017 alone and much of the population growth comes from educated, young people moving to the city.

The diverse, growing economy is one of the best advantages of living in Columbus. Unlike Cleveland and other Midwest cities, Columbus never relied on manufacturing and was founded as a capital.

Columbus has a vibrant culture and art scene

Want to live somewhere with a vibrant culture and active art scene? Its thriving art and culture is a major plus of living in Columbus!

Cbus has been named one of America’s best metro areas for the arts thanks to its world-class performing arts venues, museums, theaters, and cultural events.

The Columbus infrastructure hasn’t kept up with growth

The biggest drawback of living in Columbus is the city has not kept up with its steady growth. There’s a serious lack of parking, certain areas of the city become very congested at times, and, most notably, Columbus is the largest city in the U.S. with no passenger rail service.

If you have or plan to have kids, education is probably a big concern when listing the living in Cleveland, Ohio pros and cons. Cleveland is frequently ranked as one of the best places to live in Ohio for public schools. In 2022, five of the top 10 Ohio school districts were in Cuyahoga County including the Solon City School District, ranked #2 in Ohio.

That isn’t to say you won’t find great schools in the Columbus area; #3 on the list is Dublin City School District!

Love being out in nature hiking, fishing, boating, or just enjoying a picnic? One of the perks of living in Cleveland is its great outdoors.

Lake Erie is perhaps the most obvious answer to outdoor recreation and scenery in Cleveland. Residents and visitors flock to the shore throughout the summer for huge beach parties with food and live music.

Hit the open water on a paddleboat, kayak, or jet skis. Euclid Beach Park offers 300 miles of trails plus a golf course and the Cleveland MetroParks Zoo. The 88-acre Cleveland Lakefront Nature Preserve is a big draw for birdwatching. Edgewater Beach is a gorgeous destination for picnics, swimming, beach volleyball, and strolls along the shore.

Cleveland MetroParks features 18 reservations encircling the city and following the Lake Erie shore and the region’s rivers. This nationally recognized park system won the 2021 Award for Excellence in Parks and Recreation Management, the highest national honor for parks and recreation.

Cleveland has a lot of crime and poverty

There are many large neighborhoods in Cleveland that never recovered from the housing market collapse and recession, and haven’t fared better since the COVID-19 pandemic. Poverty is a problem in many parts of the city and contributes to the high crime rate in Cleveland, OH. Cleveland has 327% more violent crime than the U.S. average.

Taxes in Cleveland are costly and complicated

The city income system is best described as a maze with every municipality in the metro area using a different tax rate. If you or your spouse work multiple jobs, are self-employed, or work in a city where you do not live, expect an annoying tax season.

Cost of Living in Columbus vs Cleveland

One of the most important metrics for comparing Cleveland versus Columbus is the cost of living in each city.

At first glance, both cities are comparable with a cost of living lower than the national average. Affordability is one of the biggest draws for moving to Columbus and Cleveland!

Here’s how the cities compare.

** There are 127 different municipal income tax rates in Greater Cleveland. Most townships and cities have a rate of 2% to 2.5%.

Additional Things to Consider Between Columbus Versus Cleveland

How do Columbus and Cleveland compare when it comes to population and total area? That’s a good question to ask, whether you’re looking for a more densely populated city for urban living or want more space to spread out and enjoy nature.

Columbus is Ohio’s largest city and capital with about 3x the population and area of Cleveland. However, Cleveland is more densely populated and it’s part of the larger Cleveland-Akron-Canton CSA with a population of 3.6 million.

Columbus is one of the safest large cities in Ohio while Cleveland is by far the most dangerous city in Ohio. Make sure you consider the higher crime rate when comparing the pros and cons of living in Cleveland Ohio!

Also if you do choose Cleveland, there ARE plenty of safe places to live within the metro.

Which city offers the best pro teams and sports culture? Columbus is famous for its college football culture thanks to OSU and 36 varsity teams. “The Game” between Ohio State and Michigan is fervently followed and Buckeye Nation pride is on display everywhere.

Cleveland is one of America’s best sports cities if you’re looking for professional league sports. The Cleveland Browns is one of the most successful American football franchises in history and the city is home to the Cleveland Cavaliers (NBA) and Cleveland Indians (MLB).

Do you like to travel? When considering where to live, make sure you look into the airports including nearby airports and whether there is a major hub in the area or smaller regional airports. How do airports near Cleveland vs Columbus compare?

The Akron-Canton Airport (CAK) is 50 miles outside Cleveland but bills itself as a more convenient and affordable alternative.

The nearby Rickenbacker International Airport (LCK) just south of Columbus is a cargo-focused airport but also offers Allegiant flights to a small number of destinations, mostly in Florida.

Cleveland and Columbus, Ohio both have a humid continental climate, but there are big differences between the weather!

Columbus has an average summer high temperature of 85 degrees and an average winter low of 21 degrees. You’ll get 22” of annual Columbus snowfall and 40” of rain.

When you compare Cleveland vs Columbus weather, you’ll quickly notice Cleveland gets a lot of snow – 54” of annual snowfall in Cleveland! The city also gets about 38” of rain. The winter low is 22 degrees with a summer high of 82 degrees, cooler than Columbus.

How far is it from Cleveland from Columbus? It’s 141 miles from Columbus to Cleveland along I-71, about a two-hour drive. That means you can enjoy all the perks of living in Columbus or Cleveland and still enjoy the attractions of the other within an easy day trip driving distance!

Cleveland vs Columbus: Where Are You Moving?

Which city offers what you’re looking for? Cleveland is a good place to live if you want professional league sports and endless outdoor recreation and beaches, but it has a high crime rate and high taxes. Columbus is a great place to live for excellent career opportunities, great colleges and universities, and world-class cultural attractions and art.

If you have settled on moving to Columbus, Ohio, give us a call at Krupp Moving & Storage today to get started with a free moving estimate. We’ll help you settle into your new home without the stress!