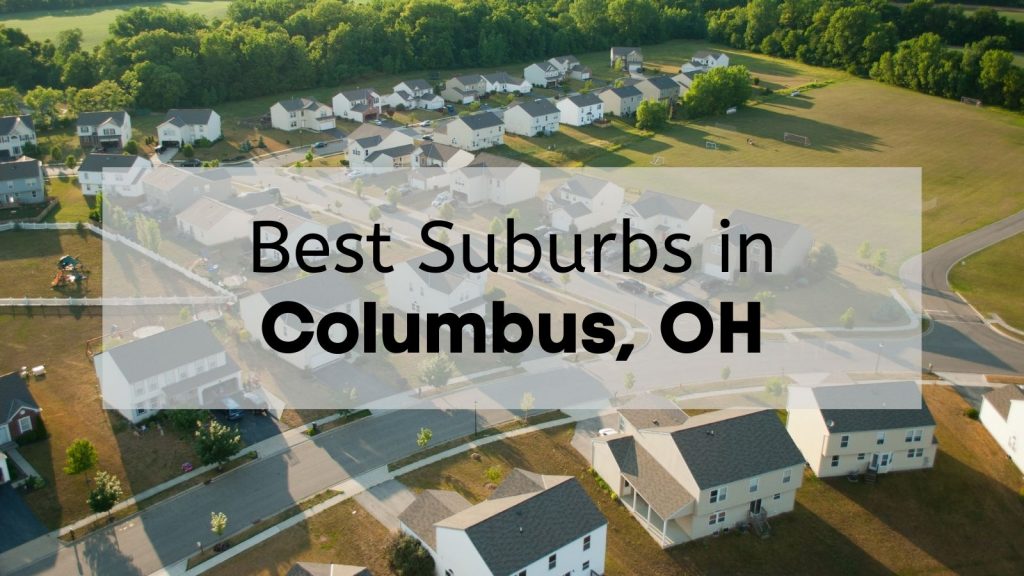 In our discussion, please remember that a suburb is an area on the periphery of a city or big town. Basically, a suburb is within commuting distance of a core city and is usually its own city. A neighborhood, on the other hand, is a community within a city. While moving has its challenges, we’re here to help figure out where to live in Columbus and make sure you pick the perfect Columbus suburb for you and your family.

Powell – One of the Wealthiest Columbus Suburbs

Powell, Ohio is located in Delaway County, which is a very wealthy community. In fact, the county is among the list of highest-income counties in the U.S and ranked 35th wealthiest county in the U.S. in 2020. The suburb is only about seventeen miles away from downtown Columbus, making it a quick trip to the city. However, if you don’t want to take a trip to the city, there’s still plenty to do in the Powell area, such as the Columbus Zoo and Aquarium, the historic shopping district, and the multiple parks. The most notable park is the Highbanks Metro Park, which has eleven miles of hiking grounds. If you don’t want to travel for food either, there are some local and chain restaurants nearby. For adults, there are many breweries and wineries in the area – check out Nocterra Brewing. As for schools, Powell is located in the Olentangy Local School District, which is fast-growing and highly rated. There are also private school options in the area as well.

Grandview Heights is just five miles west of downtown Columbus. This means commute time to the city is short, making it a perfect place for those who want to live in the suburbs of Columbus but still be close to the downtown action. Given that it’s so close to downtown, you can easily get to all of the city events and amenities. Check out a sporting event at the Nationwide Arena or the Ohio State University, or enjoy shopping in the Easton Town Center. School-wise, Grandview Heights has its own small, but high-quality school district. If you don’t feel like leaving the area, though, you can still find things to do. There are many parks, including Wyman Woods park, and a local Grandview Heights Public Library. You can also take part in many local community events, such as Taste of Grandview.

One of the safest suburbs in Columbus, Ohio is Upper Arlington. Located about ten minutes northwest of downtown Columbus. There are a lot of activities to do in the Upper Arlington neighborhood. Check out the over twenty public parks or the two different golf courses in the area. Don’t forget to check out Central Ohio’s Authentic Public Market to get fresh fruits, veggies, and local crafts. Dining-wise, there are many options. Think everything from fine dining to local restaurants to nationwide chains. Upper Arlington is also part of the National Register of Historic Places, which means there’s so much to explore in and around the city. Since Upper Arlington is its own city, it has its own police station, fire station, library, and a highly rated school district.

Rated as one of the safest cities in the nation, Dublin is a great place to raise kids. As the name suggests, Dublin is very Irish. The Dublin Irish Festival, which is the nation’s largest Irish cultural event, is held in Dublin, OH. You might also know Dublin’s name since it hosts the annual Jack Nicklaus PGA Tour Memorial Tournament. On top of all of that, Dublin is very business-oriented, it is home to more than twenty corporate headquarters and thousands of businesses. There are plenty of great restaurants in the area and, yes, there are Irish pubs. Another reason Dublin is a great place to raise kids is because of the schools in the area. All three of the high schools in Dublin rank among the top high schools in the country.

New Albany is located in Franklin County and Licking County, about fifteen miles northeast of downtown Columbus. Here in New Albany, you can find higher-priced homes that are mostly colonial, craftsman, and farmhouse-style houses. There are many kid-friendly amenities in New Albany, including many public parks that have many sporting fields and courts, such as baseball, football, soccer, lacrosse, tennis, and basketball. Check out Bevelhymer Park, Wexner Community Park, and Thompson Road Park. There is also the New Albany Library branch and the Plain Township Aquatic Center to bring the kids to as well. There are a few golf clubs in the area, including the New Albany Country Club. New Albany has annual events held there, as well. The New Albany Walking Classic and the New Albany Classic Grand Prix to name a few. The schools in the area are high-ranking. In fact, every school within the district has earned a national Blue Ribbon School of Excellence from the U.S. Department of Education.

Westerville is one of the biggest suburbs in Columbus, Ohio, located about fifteen miles from downtown. The great thing about Westerville is all of the historic buildings and homes that still stand there. Homebuyers can choose between old, charming homes and newer, modern homes. The Uptown District in Westerville is known as the historic district, filled with 19th-century homes and many bed and breakfasts. Westerville has a little something for everyone. Nature lovers can enjoy hikes through the Inniswood Metro Gardens, a nature preserve with formal lawns and gardens. Book lovers can check out books at the Westerville Public Library. Shopping lovers can enjoy shopping at the Westerville Square Shopping Center. Westerville has its own school district, with highly rated schools for every level.

Plain City – Charming, Safe Amish Town With Plenty to Do

Located a little further from downtown Columbus, Plain City is a charming small village. House hunters can find farmhouse and craftsman-style homes. What really stands out about Plain City is the safety of the suburb. There is virtually no violent crime in the area, making it a great place to raise kids. On top of that, the schools here perform above the National Average. The parks there are great. Pastime Park, on top of playgrounds and disc golf, even has camping available for quick, local getaways. Even though it’s a small town, Plain City still has a lot going on. Check out the Yutzy’s Farm Market where there’s local food and crafts (a lot of Amish-made furniture!). Restaurant-wise, there are many Amish restaurants with locally grown ingredients. One of the most well-known places is Der Dutchman Restaurant and Bakery.

Bexley is located right on the Alum Creek and just about three miles from downtown Columbus, making the commute to the city very short. Bexley is a great suburb for nature lovers. Bexley is located right next to Franklin Park Conservatory and Botanical Gardens, with eighty-eight acres of indoor and outdoor exhibits and walking trails. On top of that, feel free to have a stroll and a picnic along Alum Creek at Jeffrey Park. Bexley also offers other amenities, such as the Bexley pool and public library. For more information on schools, check out Bexley School District. The Bexley suburb is a great area for families with a strong community. Check out Bexleys Suburb to learn all about the community and its values.

Located about ten miles north of downtown Columbus, you’ll find the beautiful, charming suburb of Worthington. There are plenty of outdoor things to do in Worthington, including long strolls along the water at Rush Run Park. You’ll never run out of things to do here since the Worthington Arts Council always has art-related activities, shows, and events happening throughout the year. The events are for all ages and interests, so there’s always something for everyone. One of the more well-known things in Worthington is Market Day. At the market, you can find outdoor fun, crafts, and pancake breakfasts! You don’t need to wait for that annual event for fun, though. Every Saturday Worthington has a farmers market filled with local, fresh food, plants, and crafts. There are many casual dining places in Worthington, including The Shops at Worthington Place. For more information about the schools in Worthington, check out Worthington School District.

We are so excited that you decided to make Columbus, Ohio your new home! You’ll love living near the bustling, growing city that offers a wide variety of attributes to make just about everyone happy. Once you figure out the best suburb for you and your family, let us be a part of the journey. We know moving can be challenging, so make sure you have the best Columbus movers with Krupp Moving.