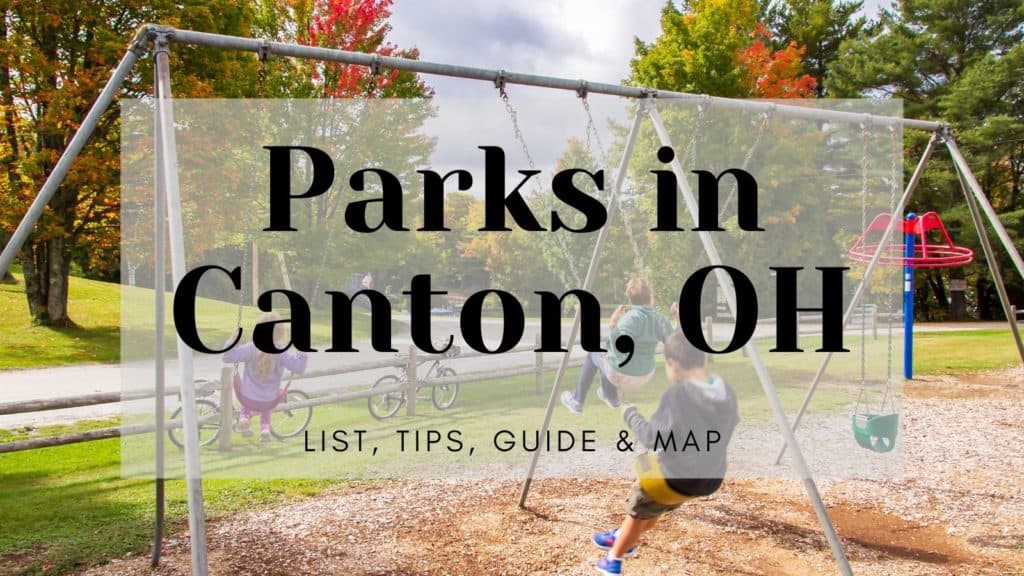 Ready to start exploring the best parks in Canton with the kids and pets? Canton may not be a large city but it’s home to more than 800 acres of recreation areas and parks and it’s a short drive from several top-rated state parks and preserves. From small parks in Canton that are great for afternoon play after school to sprawling recreation areas with ponds and beautiful scenery, Canton definitely has it all!

Here’s 7 of the most fun and beautiful parks in Canton, Ohio you’ll have fun exploring whether you’re looking for duck ponds, hiking trails, fishing, or sports.

Want beautiful scenery and a day of fun in the sun with the kids? Stadium Park is definitely one of the most popular Canton parks and it’s the largest, stretching from 12th to 25th Street NW with 77 acres of picnic, nature, and play areas. The park is great for the whole family with a softball complex, large playground, and duck pond to keep the kids busy and a rubberized track and exercise stations for adults thanks to recent improvements. During the winter, Stadium Park hosts Canton’s annual light display.

According to a recent comprehensive plan for the park’s maintenance and improvement, it was identified as “the flagship park of Canton” and a “regional destination for many northeast Ohio residents.” A survey also found it’s the most visited of all Canton parks.

Stadium Park is also home to the Canton Garden Center which has free gardening resources and a children’s garden outdoors. You’ll find other nearby attractions with the adjacent Monument Park, McKinley Memorial, and Pro Football Hall of Fame just a short walk away. Be sure to stop by the John Barker Spring House, an historical landmark created when the Water Department drilled a well into an artesian aquifer. For almost 100 years, Canton residents have enjoyed the cold, fresh drinking water from the spring for free.

Located right next to Stadium Park is McKinley Memorial Park, home to the McKinley National Memorial. The McKinley Monument is the final resting place for President William McKinley and the Monument towers over nearby I-77.

Get a good workout by climbing the 108 steps then explore the interior of the monument which is home to a stunning interior dome with a red, white, and blue skylight with 45 stars, the number of states in the U.S. when McKinley died. You can go inside the Memorial between April 1 and November 1.

The green space around the McKinley National Memorial includes a picnic area with grills and a large duck pond that’s transformed into an ice skating rink every winter.

Price Park has it all: shaded play areas during the hot summer days, a paved walking path for getting some exercise, new playground equipment, and a picturesque fishing pond.

Price Park is the perfect place for the entire family to enjoy great weather. Younger kids love feeding the geese and ducks while older kids can enjoy fishing lessons. Just note that the pond is catch and release only!

The 18.5-acre park also has plenty of ballparks with a basketball court, baseball field, tennis court, and sand volleyball court. The playground equipment is fairly new and includes climbing structures, a toddler area, swings, and nearby restrooms.

Have a dog? Feel free to bring them along on your outing but remember that dogs shouldn’t be within 15 feet of the 1-mile paved walking path.

Located between Massillon and Canton, Sippo Lake Park is one of Stark County’s most beautiful nature preserves. It’s also one of the best parks in Canton, OH for fishing, boating, and hiking. The park surrounds the 99-acre Sippo Lake and Sippo Lake Marina with boat rentals, live bait, and tackle.

If the lake isn’t enough, explore trails that trace the shore and wind through the forests and wetlands of the 300-acre park. Be sure to visit during the fall to see the rich colors of the maple and red oak trees in the forested area!

Nimisilla Park is the Heart of the Heart, located right in the center of Canton. It’s one of the most fun Canton parks for kids and a popular neighborhood hangout spot. The park is home to a new playground plus basketball courts and covered picnic areas. There’s also plenty of green space to explore!

Nimisilla Park recently became the first park in Canton, Ohio to have a historic marker from the Ohio History Connection. The McKinley Memorial doesn’t count because it’s on private property. The marker commemorates the park’s history as a gathering place and site of the county fair between 1859 to 1893 before it became a park. It’s hosted everything from a zoo and horse races to soldier reunions and three presidents have given speeches at this historic park!

Want to spend a day out with the entire family — including the four-legged members? Veterans Community Park in Plain Township is the place to be! This sprawling 42-acre park in Canton is one of the best Canton parks for dogs with a dedicated 4-acre dog park that even features dog showers, shaded areas, and dedicated fenced areas for small and large dogs.

One of the highlights of Veterans Park? Its playgrounds! The park has several recreation areas for kids including an ADA playground and a sledding hill. In the summer, kids love the new splash pad which just opened in 2018. The splash pad is open every day from Memorial Day through Labor Day from 11am to 7pm. There’s even a pond to explore and a 9-hole frisbee golf course.

Feel like a long day in nature? While just outside of Canton in neighboring Massillon, Jackson Bog State Nature Preserve is worth the 8-mile drive. This peaceful nature and bog preserve is one of the best parks near Canton, Ohio for long walks. It covers 58 acres in Stark County and formed as four large glaciers moved across Ohio 25,000 years ago. Walk along the 1.5-mile boardwalk trail and listen for the park’s songbirds. Bring the kids along to learn about nature and spot small wildlife!

Parking is easy to find at the adjacent Jackson Township Park and there are restroom facilities and picnic areas.

No matter which Canton neighborhood you call home, one of these great Canton parks is probably just around the corner! You’ll have fun exploring Canton’s natural beauty in all four seasons. If you’re planning to relocate to Canton in the near future and you’re ready to see these fun parks for yourself, call Krupp Moving & Storage today for a free moving estimate from our trusted Canton movers!