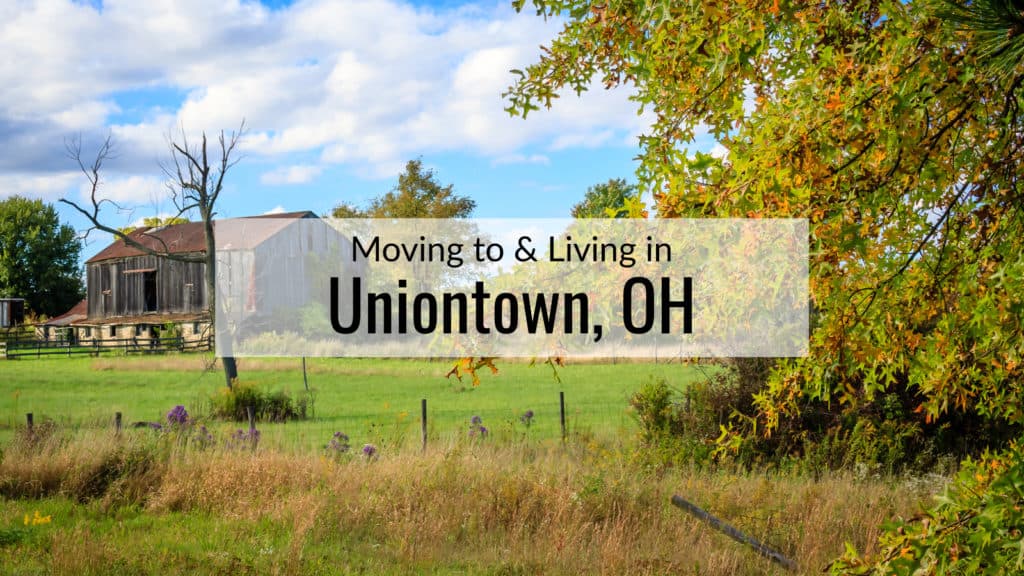 Just south-east of Akron, Uniontown is a small census-designated community in Stark and Summit County. Uniontown’s history is linked to that of Ohio’s, being initially planned in 1816, and growing until it had a church, school, and other essential buildings by the 1830s. Uniontown’s history hit a rough spot with the Industrial Excess Landfill, which in 1983 was found to have caused health issues to residents nearby. However, the landfill was quickly shut down, and the EPA conducted a thorough cleaning of the area. With the area safe once more, Uniontown became prime real estate for those looking for a historic rural community to settle down in.

When we say Uniontown is small, we mean it! With a population of 3,250 distributed out over 3 miles at a rate of about 1,200 people per square mile. The median age here is 43.7, which is about ten percent higher than the Ohio average of 39.3. The median household income in Uniontown is $68,583, about 25% higher than the average income for the state of Ohio.

Uniontown is a very homogeneous place, with 97% of the population being Caucasian, and few minority communities existing in the area.

Cost of Living in Uniontown, OH

While Uniontown has a more upper-middle class feel, you’ll find its cost of living to be manageable and pleasant, with the cost of living here being 7% lower on average than other places in America. Homes here are more expensive than the usual in Ohio, but not overly so, with housing costing you $159,400 on average. You can also expect to pay less than the national average for things like healthcare and transportation, although groceries are slightly more expensive. You’ll find renting in this area is also very affordable, with an average of $849 per month for all types of apartments.

Uniontown is a lovely rural/suburban area that has much for those who desire a quiet and small community, while also being affordable but not cheap.

Uniontown is served primarily by the Green Local School District, as well as the Lake Local School District. Parents will be pleased to know that Lake Local has a 100% rate of above average schools, while Green Local has some very highly rated schools as well. With excellent places of learning like Green Intermediate Elementary and Lake High, your child is in good hands while you’re living in Uniontown.

Interested in pursuing higher education while living in Uniontown? The only college in town is the W. Howard Nicol School of Practical Nursing, but nearby Akron has the prestigious University of Akron, as well as a multitude of private, specialized universities for tradesmen and other people with plans to enter certain industries. While this town doesn’t have Harvard, there’s still plenty of great nearby college options!

Uniontown is situated in Ohio’s northernmost part, not far south of Lake Erie. You can expect lows of 20 degrees Fahrenheit during the winter months, and highs of 83 degrees Fahrenheit during the summer months. Uniontown experiences just around the average amount of rainfall when compared with the rest of the United States, with 38 inches per year as compared to the national average of 38.1 inches. Uniontown experiences almost double the snow than average, with 42 inches as compared to 28. The best times to visit Uniontown, in terms of comfort rating, are June and August.

The closest thing to separate neighborhoods Uniontown has is its split between the northern and southern portions of the town. The State Street community, which constitutes Uniontown’s southern section, is also the most expensive of the two. Meanwhile, Edison Street is the northerly section, and also the most affordable.

If you want to make yourself a part of any of these communities, you should check out the latest listings for homes for sale in Uniontown, OH.

Those planning on making a living in Uniontown should know that wages have been decreasing quarterly, but only by 2%, and cost of living has been relatively stable. The most popular employers in this community are New Innovations, Wayne Homes, and Diebold Incorporated. The most popular positions of employment are Operations Manager, Mechanical Engineer, and Electrical Engineer. The average salary for a worker in Uniontown is $64k a year, while the average hourly wage is $16.66.

Management and finances are king here in Uniontown, as is the story in many places in the US. Check out the latest listings for jobs in Uniontown, OH here.

Things to Do in Uniontown, OH

Uniontown may be small, but its proximity to Akron means you won’t lack options for shopping and play! Check out local shopping centers like the Tri-County Plaza in nearby Akron if you want a premium village shopping spree! You should also check out some of the best things to do in Uniontown, OH below:

Located in a convenient spot right in the center of town, the Uniontown Community Park is a wonderful little spot for an outdoors activity with your family and your kids. Featuring a playground and other amenities, this little park packs a lot of bang for its buck!

No, not the one in New York! This larger park, technically property of the city of Green but located in Uniontown, has plenty of wonderful equipment for your child to have a blast on! From a splash pad, baseball field, and more, Central Park is a fun, family-oriented experience!

Uniontown, OH Additional Attractions (or nearby):

Places to Eat in Uniontown, OH

Alongside its host of things to do, Uniontown is also home to plenty of great eats! Check out some below:

A little slice of the land of the rising sun here in Uniontown! Enjoy an authentic Japanese dining experience in one of two Kasai locations, both in Ohio. With sushi, sashimi, and more, this is the place to be if you love Japanese cuisine!

Both a restaurant and a pub, this small chain of three locations, one of which is in Uniontown, has one big claim to fame: their founders invented the hamburger and the ice cream cone! It might just be legend, but what is certainly not legend is the great beer and food served here!

Ready to finally take the final step and start your journey to making Uniontown your new home? Give Krupp Moving a call! Our crew of highly-trained professional movers will ensure your move is a stress-free process at affordable rates! Call now or fill out our online form for a free quote!