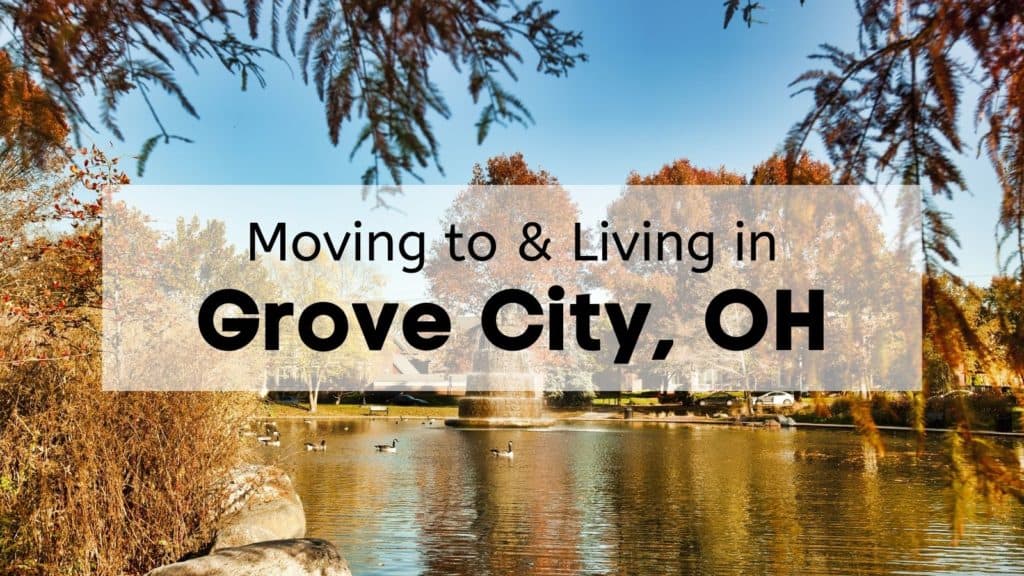 Located on the south-western edge of Columbus’ metropolitan area, Grove City, so named because it used to be the site of many trees before the area was populated in the mid-19th century, is an upper-middle class suburban community. This city was also the location of the first horse racetrack in Ohio, Beulah Park, opened in 1923. The area is known as a quiet and safe area, with an easy commute to the city of Columbus. Several notable people have made their homes here, including pro wrestler Alexa Bliss and Twenty One Pilots frontman Tyler Joseph.

Grove City has a population of 40,797 distributed over 17.2 miles at a population density of about 2,300 people per square mile. The median age here is 38.5, which is marginally lower than the Ohio average of 39.4. The median household income in Grove City is $74,284, which is about 1.3 times higher than the average household income for the state of Ohio, being $56,602.

Grove City is upper middle class, but not too expensive, with the cost of living here being 10% lower than most places in the United States, according to Bestplaces. The median home price in Grove City is $188,300, which is 1.3 times more than the average Ohio home price of $145,700. If you choose to move to Grove City, you’ll find that you’ll be paying slightly more than the average for groceries and transportation, but marginally more on utilities. In terms of renting in Grove City, one can expect relatively affordable prices of $1,129 per month for all units.

A closer look at daily expenses can provide a clearer picture of the cost of living in Grove City. Take a look at these daily costs, provided by Numbeo.

While the list of distinct neighborhoods in Grove City might not be as exciting or unique as New York or Nashville, there’s still plenty of sub-communities worth taking a look at. Check out some of your neighborhood options below:

If you want to make yourself a part of any of this community, you should check out the latest listings for homes for sale in Grove City, OH.

If you are interested in renting, then take a look at some of the apartments in Grove City.

Ohio is fairly close to the Great Lakes, but Grove City doesn’t usually get the loads of snow and rain you’d expect from the area. You can expect lows of 21 degrees Fahrenheit during the winter months, and highs of 85 degrees Fahrenheit during the summer months. Grove City experiences more than the average amount of rainfall when compared with the rest of the United States, with 40 inches per year as compared to 38. Meanwhile, Grove City experiences less than the average in snow, with 22 inches as compared to 28. The best times to visit Grove City, in terms of comfort rating, are June and September.

Things to Do in Grove City, OH

There’s plenty of attractions to see, places to shop at, and restaurants to eat in within Grove City! Check out shopping in the area like the Shoppes of Grove City for all your shopping needs! You should also check out some of the best things to do in Grove City, OH below:

A landscaped and beautiful botanical garden in Gantz Park, this attraction draws Grove City locals for its soothing atmosphere. Be sure to check out the walking trails while you’re there!

If you want something a little more wild than the Gantz Garden, Scioto Grove is for you. Six hundred plus acres of forest, walking trails, and picnicking areas. Perfect place to spend the day out!

Alongside its host of things to do, Grove City is also home to plenty of great eats! Check out some below:

The name might sound a bit somber, but this menu is anything but! Serving classics of American grill & BBQ in a chill environment, Memories is a great place to stop by for an eat in Grove City!

The classic brewery experience is here in Grove City! Serving beers of all sorts, naturally, as well as tacos and other dishes to fill your belly, Grove City Brewery is popular with the locals for a reason.

Grove City is served by the South-Western City Public School District. Some of Grove City’s fantastic schools include Buckeye Woods Elementary School, Jackson Middle School, and Grove City High School. Your child will be in the best hands possible when it comes to their education!

Students and others in Grove City are served by the Grove City and Westland Area Public Libraries.

Those planning on making a living in Grove City should know that wages and cost of living have been more or less static, according to Payscale. The most popular positions of employment are Registered Nurse, Medical Assistant, and State Tested Nursing Assistant. The most popular employers in Grove City are Mount Carmel Health System, OhioHealth, and The Kroger Company. The average salary for a worker in Grove City is $63k a year, while the average hourly wage is $17.14.

If you’re planning on living in Grove City, careers in healthcare are sure to have many openings! Check out the latest listings for jobs in Grove City, OH here.

Explore Grove City’s large variety of things to do, places to eat, and more with this map!

Grove City’s zip code is 43123, while the area codes are 614 and 380. The commute from Grove City to Columbus is a short 8 miles, and this route will take you less than 20 minutes in ideal traffic. Grove City’s time zone is Eastern Time, and sits at an elevation of 850’.

Ready to take that last step and start your journey to making Grove City your new home? Give Krupp Moving a call at 614-000-0000! Our well-trained and trustworthy Grove City moving crew will ensure your move is an easy process, at an excellent rate! Call now or fill out our online form for a free quote!